Depth. Substance. It only took me a few hours of playing Pillars of Eternity to realise that something’s been missing in my recent gaming conquests. Truth is, I’ve grown so accustomed to action-packed and explosive AAA cutscenes that I’ve forgotten how engaging a good piece of writing can be. So I just want to bring this game to your attention in case you haven’t heard of it yet. At this point, I’ve probably only played it for 20 hours, but I give it a thumbs up and here’s why. 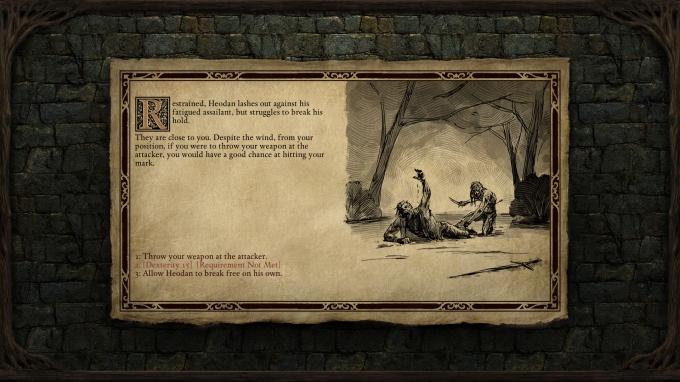 Right from the first quests, you can tell that the force of the ‘old school’ RPG is strong with this one. Instead of cinematic cutscenes, you get (scrolling) text, accompanied by voice acting or ambient sounds to bring a bit of drama to the situation you find yourself in. This is actually done pretty well, and I haven’t once wished someone would actually show it to me instead of making me read about it. I’m often a sucker for great graphics and I do sometimes whine that “the water just isn’t pwetty enough”. However, I was immediately hooked on this game, appreciating its richness in story that compensated for the lack of high-end graphics. And let’s not forget it’s actually this visual style that gave Wasteland 2 its distinguishable flavour. 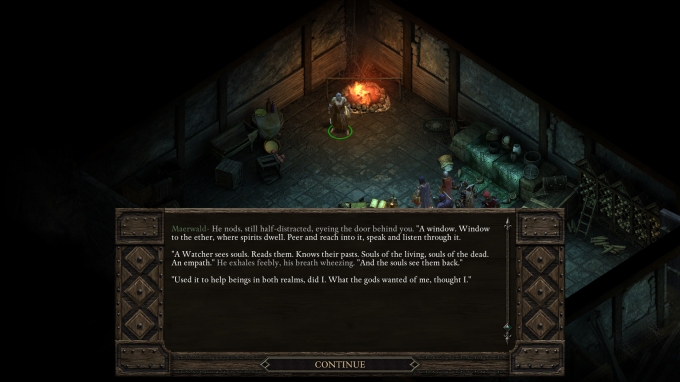 Anyway, after a bizarre incident with some hooded figures, a friendly but rather dead animancer tells your character that he has gained a new power and is now known as a “Watcher”. This basically means that you can see inside the souls of others, dead or alive. Whether this is really a curse or a blessing, I haven’t found out just yet, but my companions surely have mixed opinions when I start twitching or space out.

More importantly, this power allows you to learn more about other NPCs without really talking to them. Certain individuals bare their souls to you and let you in on some fragments of their past. Some of them are mercenaries, thieves or harlots, others harbour a secret affair or have suffered a disturbing childhood, etc. You never know what to expect before you gaze inside their souls, but as you do so from a third person perspective, you become captivated by what you see (or should I say, read). 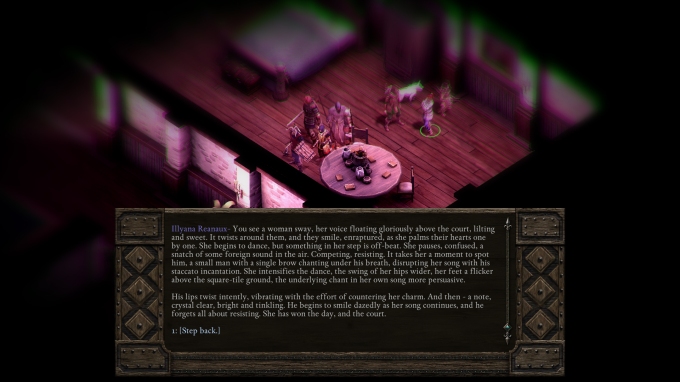 The ones who gradually join your party are a colourful bunch too. My favourite so far has to be the elven mage Aloth, who speaks like a well-mannered aristocrat until his schizophrenic other bursts out in a thick regional accent. This gets Aloth in all sorts of trouble and is simply amusing to listen to, especially when you least expect it.

Eventually, you conquer a stronghold and are given the option to transform it into a new home, guarded and welcoming to merchants and travelers. You can construct and renovate buildings to give you various resting bonuses, tax money, adventures for idle companions, and so on. To be honest, I haven’t really visited my stronghold since I started fortifying its walls, but it raises me some coin once in a while. Perhaps its true purpose will become clear later in the game. 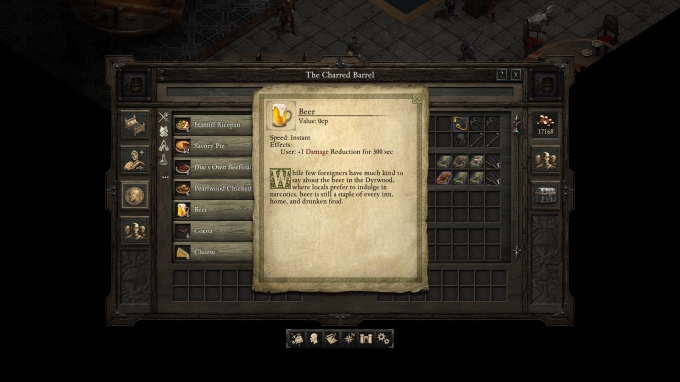 So far, there’s only one thing in Pillars of Eternity that’s bugging me. I only wish the quests would somehow indicate the optimal level requirement. Most of the time you just have to trust your gut and venture into the dungeon where you might get battered, seeing that you’re dealing as much damage as you would if you were poking a rock with a toothpick. Well, I suppose that’s the reality of it; you never know how quickly a bear can kill you until it claws your face off.

The combat system takes some getting used to at first, but once you get to grips with it, pausing to issue commands becomes a habit. Auto-attacking usually won’t cut it and you’ll have to consider which spells to use (or waste) on a certain creature. You discover the resistances of new creatures by fighting them, and all this info plus relevant lore is then added to your bestiary. Ah, this truly brings me back to D&D days. 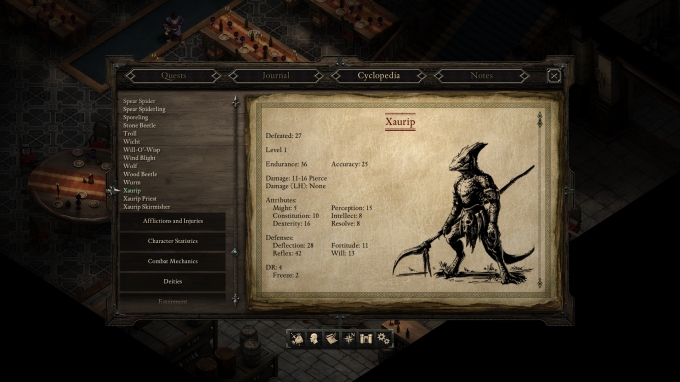 All in all, I’m glad I decided to check out why this game has been so popular lately. If you’re looking for a profound RPG these days, try becoming a Watcher. It’s pretty addictive, I promise!

More about Pillars of Eternity on the official site >

Tell me what you think Cancel reply